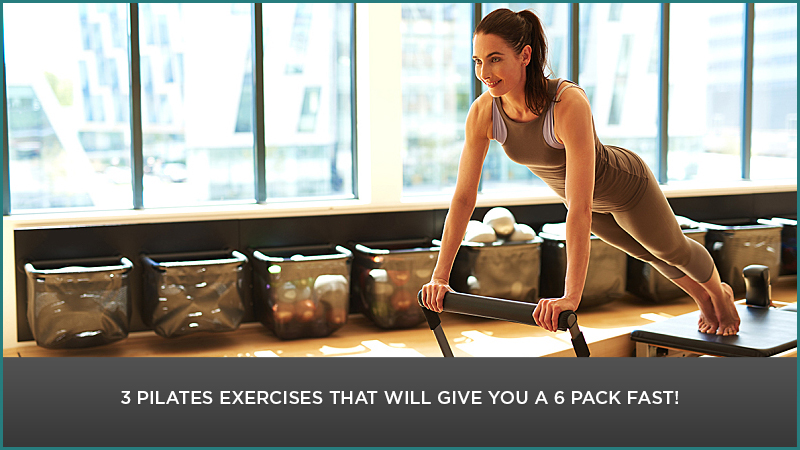 Posted at 04:00h in Pilates by Yoga Harmony

Everyone wants to look good. Everyone likes the idea of having a perfectly sculpted body that demands attention from the world in a good way.

One key part attaining that goal is the (often elusive) six pack.

You could go out and rent the eight-minute abs DVD, buy the ab roller gadget from the late night infomercial, drink a whole bunch of cans of weight-watcher diet chocolate-like substance, sweat to the oldies with Richard Simmons and get down to some hip-hop abs with the famous Shawn T.

Yet when it comes time to look in the mirror, the six pack you so desire still looks more like a big gulp. The truth is getting a six pack is no mystery. There are plenty of products out there that advertise secrets, hacks and gimmicks, but when it comes down to it, the great Joseph Pilates had the method to the perfect six-pack all along. (Joseph Pilates was the inventor of the Pilates exercise system, which based the entire foundation of its effectiveness in strengthening the muscles within the core of the body.)

Joseph reasoned that a solid core was the most pivotal part of developing a strong and resilient body, and so he went to work developing his system which consisted largely of techniques that focused on core strengthening using only the resistance of one’s own body weight against gravity.

There are a lot of exercise programs out there that are good for what they are, but Pilates is the way to go when you want great abs. Here are three Pilate exercises anyone can employ to see results in a relatively short period of time.

The Pilates curl is something like a classic sit-up with a few key differences. The old military style sit-up can cause various lower back injuries, so the modified Pilates curl gives you all the benefits, and then some, without that strain on the lower back.
Lay flat on your back. Lift your legs, knees together so that the knees are pointed at the ceiling. Raise the lower leg to point straight at the wall and hold them in that position. Lift your head off of the ground. While doing your reps, do not rest your head on the ground. Now, you simply contract the core so that your upper body moves slightly towards your knees. You won’t move much, but it will be tiring after a short while.

This one is perfect for shaping the bottom two of the six in your new six pack. Lay on your back, lift your head off of the ground just like the previous exercise, only this time, you will keep your legs straight. Your head should stay suspended in one spot. Your head and your feet should not touch the ground until you are finished with the set. Now, while keeping your legs as straight as possible and feet together, move your legs up and down to range from pointing up to the sky, down towards the wall and repeat.

The crisscross works out the entire midsection and lower-back. Start out in a similar position as the last two exercises. This time, however, instead of keeping your feet together, you will alternate each leg from straight to bent, something like riding an invisible unicycle. As you do that, have your hands lightly supporting the back of your head. As you alternate your legs, you will move your upper body so that the elbow of one side points towards the knee on the opposite side of your body. It’s a bit disorienting at first, but once you get the rhythm of it, it will feel natural.