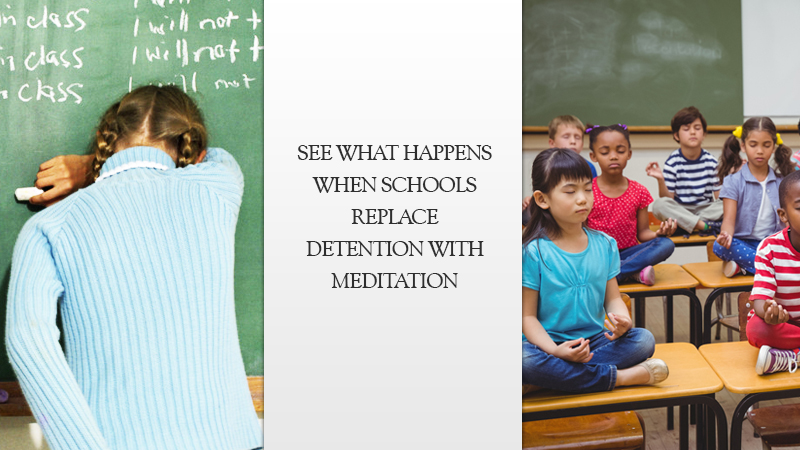 12 Dec See What Happens When Schools Replace Detention With Meditation

Posted at 03:44h in Yoga by Yoga Harmony

Traditionally, schools would attempt to control their classrooms with disciplinary measures like detention and suspension.

The results of success in these methods are pretty self-evidently low, as most youngsters have a rebellious spirit by nature and such actions just reaffirm to them how much they dislike having to go to school and put up with being scolded and stifled.

I have always said, “if we were to do away with detention in school and replace it with meditation instead, we would see the world become peaceful and prosperous within a single generation.”

Of course, that is speculation on my part, but until recently there was no way to test my theory.

Several schools across the US have finally decided to try implementing this method, and the results have already proven to be magnificent.

Peace and prosperity can be achieved with meditation – even with kids.

Meditation is a practice that predates history, yet science is only recently starting to really catch up to studying and understanding it’s purpose.

It didn’t take very long for studies to start turning up some significant results.

Meditation has too many benefits to list in one article, but just a few for sake of conversation are things like:

There are landslides of scientific evidence and first-hand testimonials all across the internet that speak to the positive effects of meditation, and the schools that have implemented meditation instead of detention are starting to report back with some great results as well.

Robert W. Coleman Elementary School in Baltimore, USA is one school at the forefront of this new way of teaching.

Instead of being punished by being sent to stare at a wall or write mindless chalkboard standards for hours, misbehaving kids are sent to what they have deemed the “Mindful Moment Room,” where they are then encouraged to sit and receive instruction on things like breathing exercises, mindfulness meditations, focus, and relaxation.

They are also given the opportunity to talk through the matter on hand to reflect on and discuss it on a level ground.

One would think that kids would not have such an easy time sitting quietly and meditating, but the actual result is surprisingly different.

Most kids that have been sent to the mindfulness meditation rooms have embraced the practices and even carry the teachings back to their every day lives.

Already the levels of incidents involving misbehaviour at these schools have drastically dropped.

Test scores and overall improvements in scholastic performance have increased, and the kids along with their families have given praise and gratitude to the meditation programs, citing that it has made a positive impact on their lives.

Meditation has previously been tried by various government institutions in small trials for things like helping war vets with PTSD recover from scarring traumatic experiences, or in prisons to help give perspective and awareness to troubled inmates and convicted felons.

In every instance that meditation has been implemented, results have been significantly positive on every front.

Meditation has always had a sort of mysterious shroud around it, as it was not very accessible to most people in western culture.

Now that science is starting to really investigate it, the real mystery has become, “why have we not been doing this?”

I can personally share my own experiences in which meditation transformed my entire life to the point where I don’t know what I would have become had I not known to try it.

I cannot even express in my own words the depth of which meditation has improved my own life, and so the news of schools actually starting to use meditation as an alternative to punishment has made me quite happy and optimistic for the future.

I would encourage everyone and everyone from school age kids to senior citizens to support these new programs and investigate how meditation can help you in your life as well.