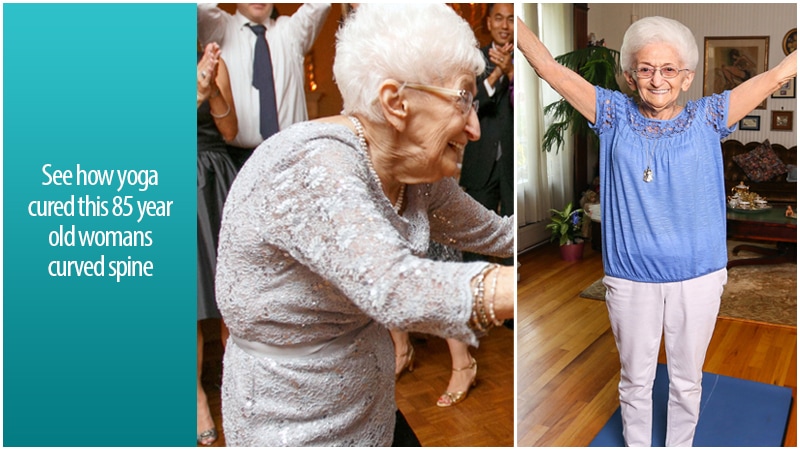 Posted at 01:41h in Yoga by Yoga Harmony

A lot of people do yoga to lose weight or simply just maintain a fit body.

But yoga does more than that because it brings healing to your body.

You can see the difference for yourself.

Her story with yoga and how it has helped her regain having a normal back has been featured in so many major publications that you would be inspired to start doing yoga sessions right away.

It all started when she almost fainted trying to go upstairs in one of her kid’s homes in South Carolina.

She was visiting them at the time and due to what happened, her entire stay was not a good memory since she had to be carried to her room.

She was also in a wheelchair the whole time she was there.

Pesce, who is originally from New York, has been suffering for a long time with a curved back.

For her age, people think it’s a hopeless case to get it back to normal.

She suffered from a herniated disc along with scoliosis and osteoporosis.

These three bone issues made her back really weak, which eventually would make her curve right over like the “Hunchback of Notre Dame.”

She said that she tried everything to alleviate her situation, but unfortunately nothing worked.

She saw a chiropractor, acupuncturist, and even a physical therapist.

But still, she didn’t find the cure or the solution that she was looking for.

Rachel Jesien helped her on her journey.

She also shared at first, those things she tried would give her a temporary remedy.

But after a while, she would have the same back problems all over again.

It all changed when she finally worked with a professional yoga instructor.

Her name is Rachel Jesien and she also has scoliosis.

She knows exactly what Pesce is going through, which is why she knew perfectly the solution to her case.

They did yoga sessions just once a week doing poses to restore her original back posture and they also did some stretches known in the yoga lingos as a “child’s pose” and the “chair savanna.”

These exercises helped Pesce so much she was able to not only recover from decades of having back problems but actually cure them!

She bid farewell to her wheelchair after just a month of doing these exercises once a week!

It is amazing what yoga can do for the body.

It not only makes you feel good but actually has the ability to repair the long-term damage.

A lot of people think it is impossible to be cured of ailments like this.

Well, thanks to Anna, we now know Yoga can help.

Share this information with your friends, especially to those who are having the same issue like Anna Pesce’s.

It is never too late to cure your bad back today!