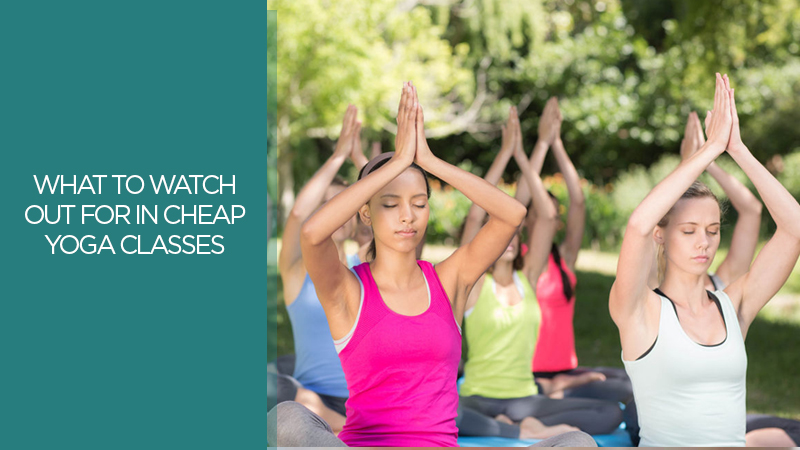 29 Nov What to watch out for in cheap Yoga classes…

Posted at 05:21h in Yoga by Yoga Harmony

Yoga has been around for thousands of years.

As an art form and a path to spiritual enlightenment and self-discovery, yoga has been practiced by some of the wisest and most enlightened people to ever walk the earth.

Besides just being a study of enlightenment and wisdom, yoga is also known for its rigorous exercise regiments, and has therefore started to become quite popular in modern western culture amongst people looking for hip ways to get in shape.

While the spreading of yoga to western culture is ultimately a good thing, there has been some pitfalls in the translation from ancient India to modern metropolis.

Like anything that catches on as a trend, there are plenty of scammers and fakers who are not truly there to teach a path of self-discovery but to simply cash in on another trend.

Money is a concern to most of us, but there are certain things that just shouldn’t be short changed.

In the end, you get what you pay for, and do you really want to pinch pennies to save a couple bucks when an education in an ancient path to enlightenment is at stake?

All over the place, yoga studios and classes have sprouted up.

It makes one ask themselves, “just how many yoga masters are there living here in a big city?”

The answer to that question is most likely not that many!

There are plenty of people who have taken some classes in yoga, or maybe received some sort of “certification” as a “yoga instructor,” but does that make them the real deal?

The answer again is “most likely not.”

In the true practice of yoga, there is no such thing as “yoga certification.”

The idea is a tad bit preposterous.

That is something like going to the Shaolin temple to study kung fu and asking the monks if they have been “Kung fu certified.”

They would be likely to look at you with a quirked eyebrow if they even understand the relevance of such a question, to begin with.

Much like kung fu, yoga can be considered a form of martial arts and be pursued as an entire lifestyle.

A true and great master to learn from can accelerate your progress, teach you the right way and in ways that are elegant and profound.

A phony teacher can waste your time and money running in circles, forming bad habits and hinder your growth by filling your head with untrue principles and misguided routines.

You can get quite skilled with Yoga.

In many cases, a yogi or master who is not truly qualified to teach can even be dangerous, as is the case with any fitness instructor who is not well versed in the proper ways to conduct an exercise to avoid injury.

If an unqualified teacher has you do something which causes injury, you likely wish you had spent that few extra dollars on a true legitimate yoga class!

If you are serious about starting a class in yoga, please be careful and really do your research!

Make sure your yoga is the real thing!

While a watery version of yoga may be offered at a more affordable price, in the long run, you will spend far more time and money while learning and accomplishing less.

Yogis who live in the big city need to eat too, and they deserve support for their valuable mastery and instruction.

At the end of the day, the things that you will learn from a real yoga master in a real yoga class cannot be assigned a cash value.

They are priceless gems of wisdom which will enhance your entire life, so please, take care in choosing a yoga class carefully!